To see the article on the Norwich and Central Norfolk Mind website go to the link above.

Article about Yessica’s Journey in the Norwich University College of the Arts Alumni Magazine. 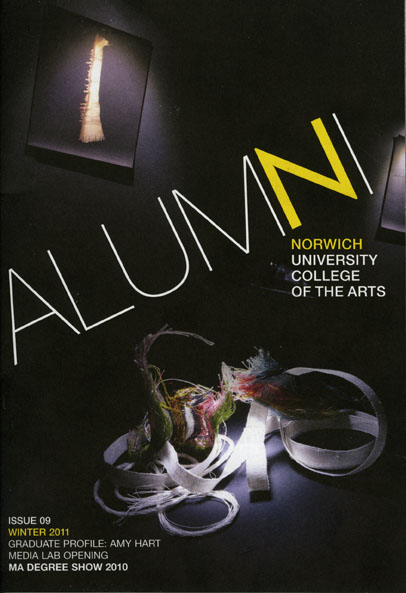 Article in 'whatever happened to' section of NUCA Alumni Magazine

The auditions were organised by myself and Oz. I found the whole process really enjoyable and interesting and I was overwhelmed with the response to the adverts. We had over 100 people apply for the roles of the Magician and Yessica, which is incredible, it was a huge success. It was very hard making decisions, there are so many talented people out there. We narrowed the list of applicants down to 30, who sent in samples of their voice reading from a section of the script. We then selected 12 applicants from this list. 7 Magicians and 5 Yessicas. Myself, Oz and Jane made the selections. We mainly had applicants from Norfolk and London.

The applicants had a choice as to whether they would like to attend audition at Mind or by sending in a sample. This was mainly to make it fair to everyone as some people from London were unable to make the audition and we felt it was a long way to travel for half an hour. We held auditions at the Norwich and Central Norfolk Mind organisation on Friday. Despite the bad weather, snow everywhere, we still had 5 people who came for interview. I would like to thank all of those people for making it through the snow and attending. It was lovely to meet people and I was really impressed by their confidence and talent. From the small sample of script that we gave them to read, they totally understood what Yessica’s Journey is about. I asked them to read the sample script again and also asked everyone to bring a sample of their choice, something which was relevant to the subject. I found this really interesting as their choice was excellent.

We recorded some footage of the event which we may choose to use on the website and possibly in the ‘Making of Yessica’s Journey’ Film. I also got to use my new gadget, a H4n Handy Recorder. Managed to record all the audition voices so I can play them at home and listen to them before making the final choice.

The other 7 people are sending in samples of their voice and also sending in something they have choosen themselves by email.  I am looking forward to listening to them all next week and making the final decision. This is going to be really hard as there are so many good people to choose from.

Thank you and Happy Christmas.

Went to the Health, Happiness and Wellbeing Event at the John Innes Centre in Norwich. The Norfolk and Waveney Mental Health NHS Trust organised it (Hellesdon Hospital). Andrew Willoughby gave a really good talk on the 5 Ways to Wellbeing.

Click on the above link to view the article about Yessica’s Journey on the Genomic Minds Website.

I met Jamie when I went for a meeting with the BDRN Research Team in Cardiff and he kindly offered to put some information about the project on his website.

‘Genomic Minds – a spin off website of the MRC Centre for Psychiatric Genetics and Genomics – http://www.cf.ac.uk/cngg. This website combines visual art, film and cinema, prose and poetry and social science to bring psychiatric genetics, mental health and neuroscience to a wider public audience.‘ (text from website)

So many things seem to be going wrong at the moment I decided to spend the day doing something nice. I designed a Yessica’s Journey Christmas card. I came up with the idea for the card when I was away last week at Potters. Its Yessica at the top of a stack of books. Shes like a shinning star, a fairy or even a special little spirit at the top of a Christmas tree. I photographed the books and then made a drawing of them. The books I photographed are all the books I read and became obsessed with during and after my illness. It was quite good fun creating a sculpture from all the books. I guess I spent a lot of money on books. The background is a watercolour painting and the rest is Photoshop.

We had an amazing response to the advertisements for the character voiceover roles of Yessica and the Magician. Over 100 people applied. We got the biggest response from the advert placed on Shooting People. We found it very hard to select people so we decided to ask people to send in a sample of their voice reading part of the script.

We had 30 people apply and we selected 11 people to audition. Auditions are being held at Mind in Norwich on Friday 17th. Candidates who are unable to attend in Norwich are sending another voice sample by email.

Oz, Jane and Myself made the selections.

Well I received feedback from the script (this was the second time I have sent it out for feedback). Some people thought it was good and needed no changes while others thought that the recovery section of the script needed working on. I got some really useful feedback from the Cardiff BDRN team.

I also felt the recovery section was not quite right, I had mainly concentrated on the psychosis bit of the script as this interested me more. I decided to ring Marie-Lise at the Wellcome Trust and I am so glad I did. She gave me some really good advice and also pointed out that the recovery section needed changing. She said that the script was too literal and it needed to be more figurative with the script and the visuals. She also said it was important to make sure  that I ‘stay true to my own personal experience’.

I am so glad I spoke to her. This is exactly what I needed, it totally woke me up and I agree with her. I knew there was something wrong with the script but didn’t say anything. I have no idea why, I think at the beginning of the project I did not feel very confident and found it hard to talk and say exactly what I wanted. It is also quite hard writing your own experience and writing it with two other people. We did it quite well really as we could only meet up a few times, most of it was done over the internet. I don’t think I would even have a script if it wasn’t for Oz and Jane so many thanks.

I think at times I was trying to please too many people, including the organisations. I was always asking everyones opinion and getting feedback – perhaps this was a mistake, you can’t please everyone. I also think I was worrying too much about offending people and what I should and shouldn’t say, how far can I go…..

I think a big part of the problem is my confidence. I think Jane and Oz have done a fantastic job and hopefully the three of us will be able to sort it out and make it work.

I decided to go away for a few days to Potters near Lowestoft which is a holiday resort by the sea. Decided at the last minute and spent my savings. I just felt suddenly very worried that the script was not right. I felt that this was something I needed to do on my own initially as it is based on my own personal experience. I also felt I needed somewhere quiet to work and concentrate – I get easily distracted by noise.

I took all my notebooks that I wrote during my illness and all my research notes, symbol books and laptop computer. I spent ages reading everything again and doing a lot of thinking. I managed to input lots of new things into the script but it is still no where near finished. I would describe it as a muddled mess at the moment. Anyway its a start and it was definately a good idea to go away to write by the sea.

Yippee……managed to finish designing Yessica before the deadline of the 6th. I am really pleased with her but I realise she is probably going to be much more complex to make. She is 11 inches tall. I have decided not to post any images of her and keep this as a surprise for the film.

Sent all the files through to Justin who is making the puppet. Having a few problems now – had to change the proportions of the puppet which I did not like doing. Her head is too big to make so had to make it smaller, made her body bigger and adjusted her hair. I had to compromise and it is hard but she still has a big head compared to her body which I wanted.

It was really important to try and keep her as small as possible as the size of the puppet effects the set. I am filming this all in my bedroom so if the set is too big I would have problems.

Oz Osborne the Associate Producer and I went to London to attend the Grantholders Day at the Wellcome Trust. Really enjoyed the day, we met lots of other people who were doing interesting projects and people who have previously been funded by the Wellcome Trust. Learnt a lot about the charity and met some really nice people, we were made to feel really welcome. The building is amazing, very posh.

I came away thinking how lucky I am to have been given this opportunity. I was also thinking how come they are funding my little project, all the other peoples projects seemed so different to mine.

This blog contains photographs taken from events I have attended. If your photograph is on this blog site and you wish it to be removed please contact me and I will be happy to remove it for you.
info@yessicasjourney.com

Welcome to the Yessica’s Journey Blogsite. A Journey through Mental Health, Wellbeing and Creativity.

© Copyright 2008-2012 Anastacia Tohill - 'Yessica's Journey Blog'. All rights reserved. All moral rights reserved. It is strictly prohibited to copy, duplicate, download or distribute content of this blog to other people without prior permission from the author. Links may be used, provided that full and clear credit is given to Anastacia Tohill and Yessica's Journey Blog with appropriate and specific direction to the original content. Please see copyright information at bottom of website. This blog contains photographs taken from events I have attended. If your photograph is on this blog site and you wish it to be removed please contact me and I will be happy to remove it for you.